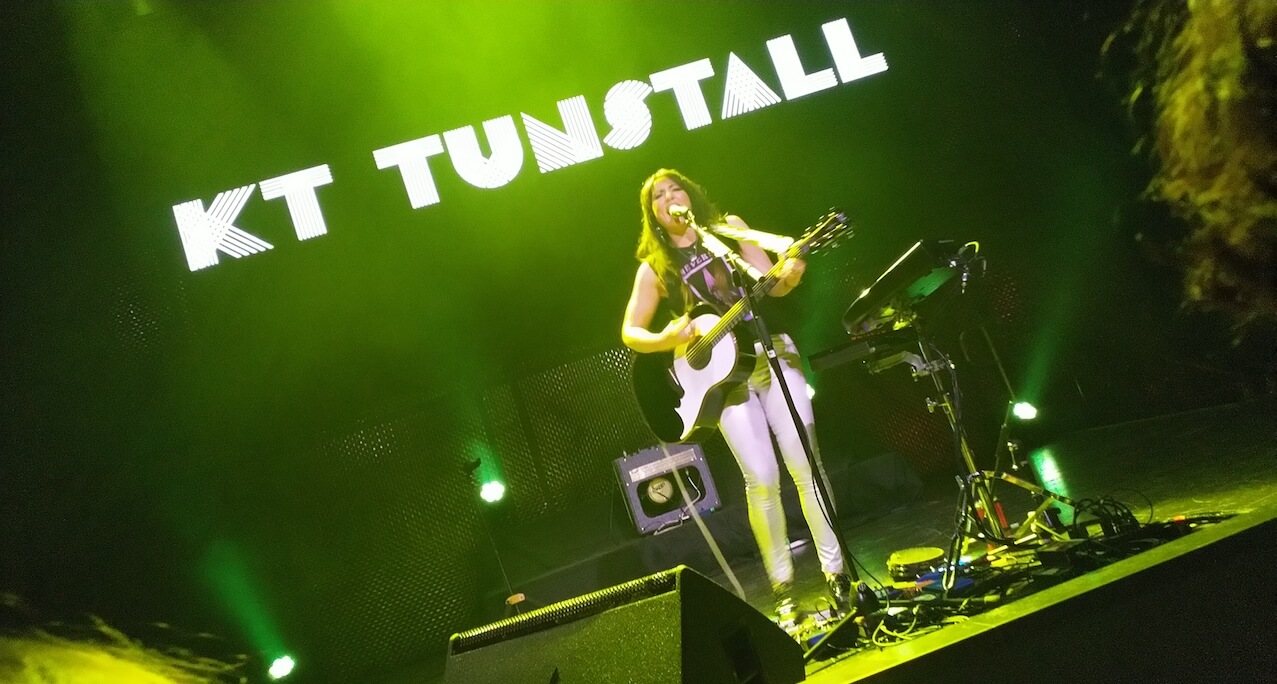 She was a literal one-woman band: KT Tunstall, her Taylor guitars (“made from sustainable wood!”), tambourine, synthesisers and loopers.

We were very lucky to see her, as she’d had to cancel the previous three shows of her West Coast Ramble tour due to illness. She was still not 100%, she explained to us, as she administered a dose of Singer’s throat spray. “It’s PROFESSIONAL STRENGTH! I’m a professional!”

(I’m definitely not a professional, but I might get some. I sang solo at the Fringe Festival in KT’s home town last summer. On the day of the performance I practised far too hard and got a sore throat… Rookie error… Can’t guarantee I won’t make the same mistake again.) 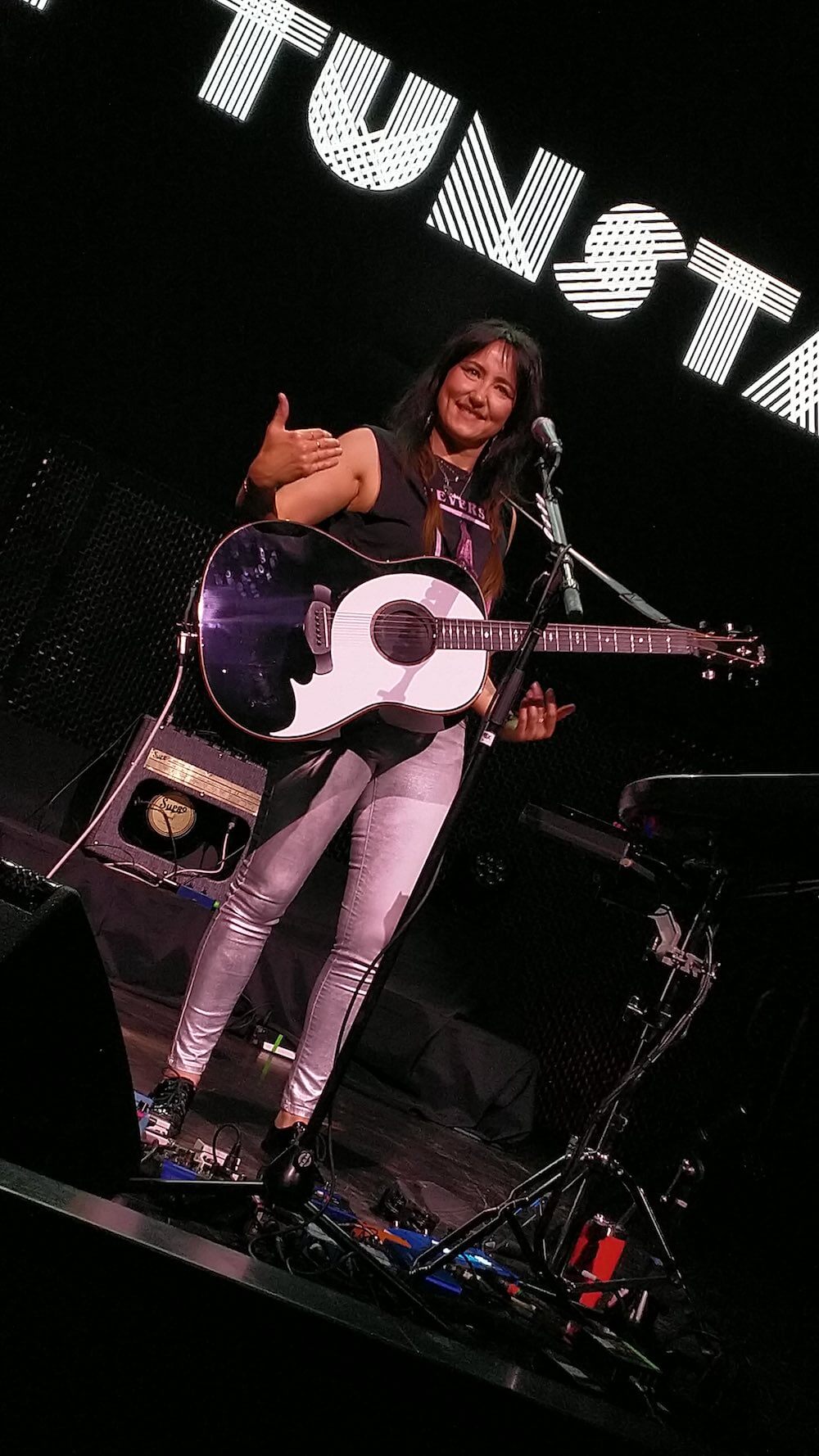 “I’d like to introduce my band. They’re from Taiwan,” she laughed, gesturing at the several metal boxes at her feet. KT Tunstall employs a technique called looping, which I first saw someone use on the BBC sofas at Glastonbury a few years ago. What happens is that the artist creates and records a sound right there, then plays it back on a loop, hence the name. They can layer these up to form the illusion that an entire band is playing with them.

The recorded sounds can be anything from a thump on the body of the guitar, a beat on the drum machine or a sung phrase. With the latter, the singer becomes their own backing singer. KT Tunstall used this technique for us on Suddenly I See. She recorded two versions of the title phrase which she played back while she sang the song, to create echoes of herself. 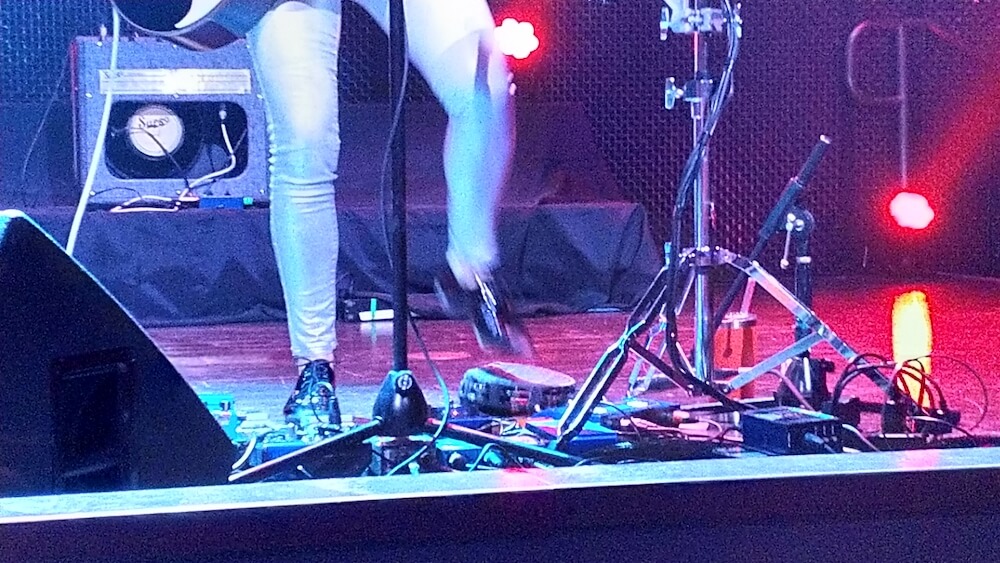 Because she had both hands occupied with the aforementioned guitars, she also played the tambourine with her left foot. I have no idea how these folks can stand and perform for so long without getting foot pain. Really good shoes, maybe? She was wearing a lovely pair of highly-polished black patent lace-ups.

Speaking of which, KT Tunstall asked us to imagine a situation where “you’ve just bought a brand new shiny pair of white hi-tops and you’re walking to a really important meeting, when you step in dog shit. And then you’re faced with the choice of chucking your hi-tops and going to the meeting with no shoes on, or trying your best to scrape it off and walking into the room stinking of dog shit…” Unfortunately, I am the world’s worst gig reviewer, so I can’t remember which song she was about to play at the time.

I do remember, however, how she introduced White Bird because it involved my home town in England. “I had moved from Edinburgh to London and it was really grim. There wasn’t any wildlife except for pigeons. I remember seeing a white one in a playground and it was the only one with a black tail.” She’s right. London can be a very grim place.

KT Tunstall doesn’t live in the UK any more. A few years ago, she decided to move to California. “I live on a hill in LA now.” But she’s got a lot of UK gigs coming up this year and she took us back to her breakthrough one.

“There’s a TV show in the UK called Later With Jools Holland…” I think it was obvious we were the only two Brits in the audience as we were nodding and grinning our heads off at the explanation of something from back home. “I was asked to perform and I did Black Horse & the Cherry Tree. It was so surreal. Anita Baker was there dancing to my song.

“And then… I got to meet Robert Smith. I was like ‘oh my God, it’s this really famous person, and I have no idea what to say’. So I’m standing there trying to think of something, and eventually I come out with ‘What are you doing this weekend?’

“He said he was going to visit his parents.

“So then I naturally asked him ‘and what do they think about you wearing all this makeup?’

KT Tunstall is performing in Scotland this week.