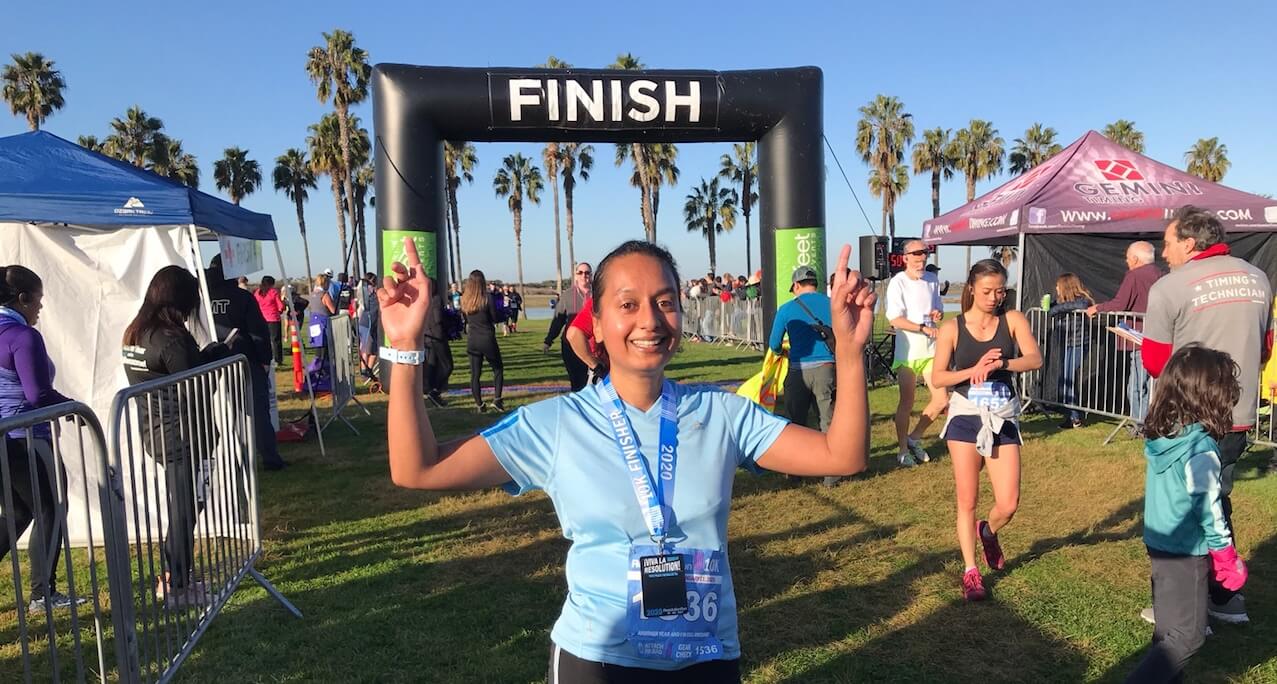 (CW/TW: body weight) In June 2016, after a couple of months of breathless perseverance, I managed to jog a whole 5k for the first time. It was all I’d set out to do. I swore I had no desire to run a race, let alone longer distances.

Yet, last weekend, I found myself lining up at 7am in 6c (43f) temps with wet feet waiting for the starting pistol on a 10k race.

Looking back, my interest in trials grew with my increase in speed over 5k. But that didn’t happen until long after that first continuous run. Shortly after I conquered 5000m in the roasting summer of ‘16, a series of major life events interrupted my flow and I stopped running. For two years.

I was taking a long, hard look at things and making some big life changes. I had secured voluntary redundancy at work and decided that being based at home for a bit was the perfect recipe for sorting out my eating to shed some of the weight I’d gained in my 30s. 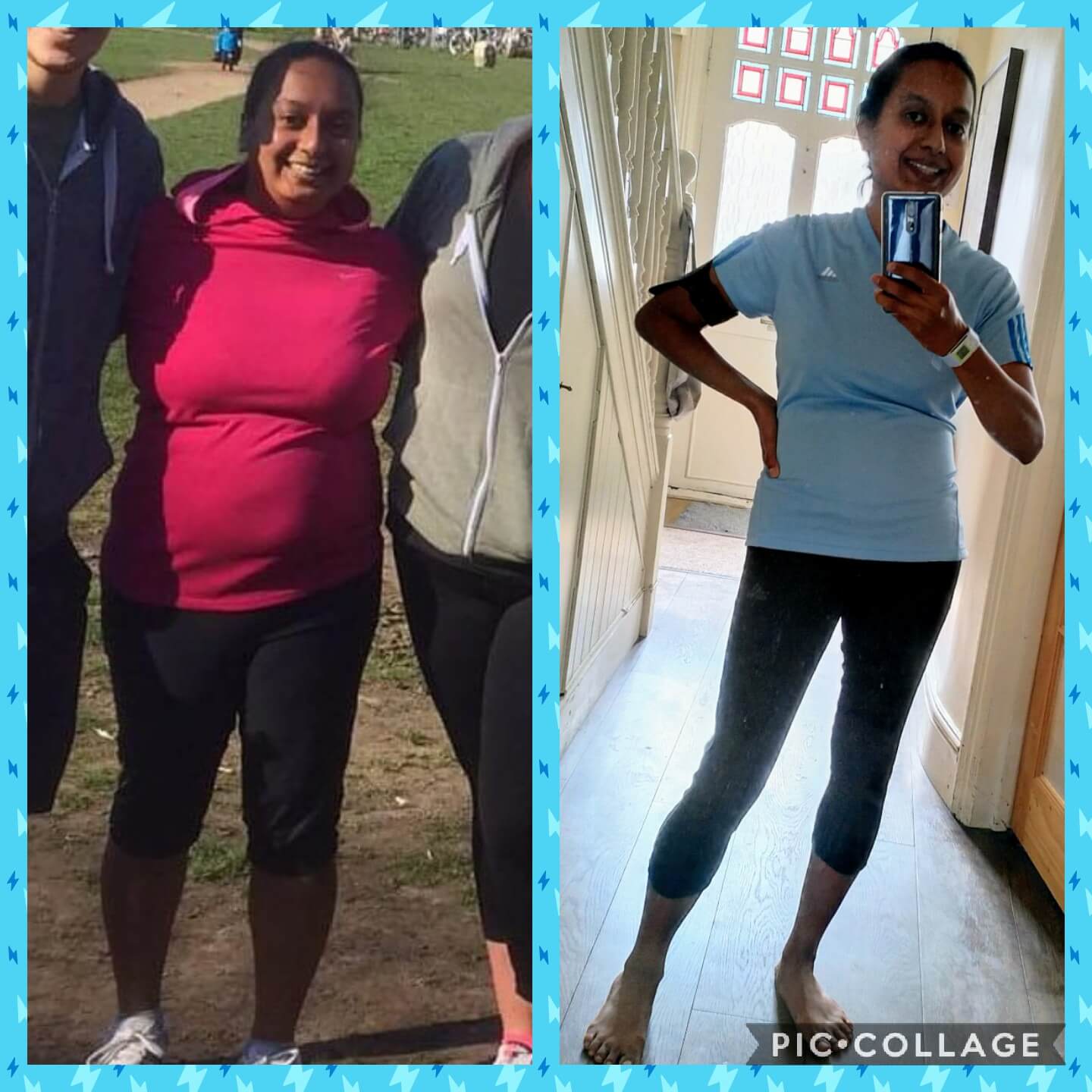 As predicted, the pounds started falling off me as soon as I commenced my career break. The long-lost motivation to don my running gear reappeared and I wanted to see if I could still do two laps at Wimbledon Common without slowing to a walk.

To my surprise, when I returned to parkrun in June 2018 after that 22-month hiatus, I ran all the way round at approximately the same speed as the first time I achieved it.

I started going every week, and every week I was faster. I started to believe that I could get my 5k time under half an hour; some weeks I was chopping off minutes so it seemed like a foregone conclusion. I had to stop running for four months, but I couldn’t wait to get back to it. My muscle memory didn’t fail me and I was faster still.

The first time I ran a time starting with a 2 instead of a 3, I couldn’t believe I had finally done it. It was 29:27, so somehow I hadn’t just scraped it either. After a short while, sub-30 became my new maximum, so I started setting myself goals. Run under 29 minutes, run under 28½. Get under 28 and stay there. Get to 25-something.

Now that I was reaching speeds I didn’t know I had in me, I started to wonder what it would be like to try and run further. Not for the purposes of doing a race, you understand; just to see what it was like…

I Googled how to run 10k. Every piece of advice said to increase your distance gradually. So I obediently made a plan to go to 7k first, then increase by 1k per fortnight until I got to 10k.

The thing is, I’m quite impatient and if I have total clarity on what I need to do to achieve success, I want to get it all done yesterday.

I ran 7k the first week, 8k the second and third weeks and then thought sod it, I’m going straight to 10.4k. I did that in exactly an hour. The following week I did 10k in 58:58. Despite the fact that, for months, I had been consistently running 5k in well under 30 minutes, I was quite surprised that my pace was similar for twice the distance.

Lots of my running friends enter races. The atmosphere, as well as their souvenir medals and t-shirts, looked cool across the Facebook dynasty of apps. I started to wonder what it would be like to compete but, at the same time, I felt I’d already proven to myself that I was now a 10k runner; the achievement was unlocked.

I was really curious though. All sorts of folk complete these races so, maybe, I could too. I checked out the results for some of the 10ks in London and realised that my time meant I wasn’t going to come anywhere near last. For some reason, I still felt like I couldn’t really do it. It was as if I thought somehow, under race conditions with all other things being equal, my body wouldn’t be able to go the distance and I’d end up a DNF.

Conveniently, since I’d left the police and flipped my work-life balance, my evenings and weekends were full of fun commitments and whenever I saw a race that looked good, it clashed with something. However, I’d booked a winter holiday in California and decided to see if anything would be happening there.

Lo and behold, I found three events. One was 5k only. One was a choice of 5k, 10k or a half marathon. The other had 5k, half marathon or full marathon options. Before I could change my mind, I went for it and signed up for all three. 5k, 10k, 5k…

So that’s how I found myself at 7am on a cold January morning on Sea World Drive, San Diego, California, waiting to start running in a 10k race. When I’d packed my suitcase back in London, I had totally forgotten how chilly it is here in winter so I had only brought my summer sports kit. Big mistake. I have all the gear and would have given anything for my gloves, ankle-length leggings and long-sleeved top. I couldn’t feel my hands and it was no consolation knowing I would be boiling hot from exertion a couple of kilometres in.

I would also have given anything to go back in time and not taken a shortcut across the dewy grass, soaking my shoes and feet before I’d even begun the race.

Doing my stretches as I waited for starter’s orders, I was surrounded by hundreds of people but very aware that I was on my own now.

I was having a quiet word with myself. You can do it. You’ve done it before. There’s no pressure. It doesn’t matter if it takes longer than an hour. Your laces aren’t going to come undone. Your phone isn’t going to fall out onto the road and smash into a million pieces. You’re not going to have an asthma attack. You didn’t go overboard with the water earlier, so you’re not going to need a wee.

Finally, we were allowed to start. I decided to take it at a leisurely pace. By that, I mean slow. I wanted to make sure I got all the way round, so I was going barely faster than a power walk. Pro tip: if you’re doing a road race, make sure you don’t trip over the cats’ eyes.

Within 800m (0.5 miles) we were on Fiesta Island - the birthplace of the triathlon - and the pack thinned out considerably. This was bliss, as I don’t like needing to get past people to maintain my speed. I want to be in the zone - mentally and physically - and do my own thing. The sun had started to rise, there wasn’t a cloud in the sky and it was perfect. A crisp, clear day. All I could hear was feet on tarmac (and a bit of heavy breathing) and I was enjoying the “me” time.

I saw the two-mile marker and chose to break my own rule of looking at my watch. I figured it wouldn’t be a problem as I had already decided I was going to be happy to complete the race regardless of my timing. I was astonished to find that it had only taken me 17 minutes to do a third of the overall distance and it hadn’t felt like hard work at all. I’m nothing if not consistent, so I was determined to maintain my pace and try for the sub-60.

Across the island, I heard the 5k race start. I felt kind of sorry for the 5k people as they’d had to stand around in the cold even longer than I’d had to. Especially as most of them were from Southern California. At least my Englishness means I’m used to the cold.

I didn’t notice a three-mile marker. I resisted the urge to check my watch, but I heard a man behind me say we had done 6k (3.7 miles) and that it had been 32 minutes…

When you’re running a 10k, you have time to do the maths and any other deep thinking you’ve been putting off. 32 minutes for 6k sounded like I was on track for a sub-60. It still didn’t feel like hard work, but I was glad I was more than halfway through. Everything in moderation and all that.

At just under 9k, I remembered that the 10k and half marathon routes would be diverging. Having spent months avoiding entering a 5k or a 10k, there was no way I was going to allow myself to accidentally run a half marathon so I paid close attention to the signage. (I’m glad I did, because when we were walking back to the car after the race, we saw a 10k runner on the half-marathon route at 20k (12.5 miles) yelling “where’s the 10k finish line?”!)

Because the 10k and half marathon runners had started together and covered the same first 9k, I had no concept of how many people were ahead of, or behind me in my race. Also, I tend to notice people passing me, but I don’t realise that I probably overtake a good number of folk too - possibly some of the same ones.

I knew, however, that sub-60 was a good time and I was probably going to achieve it.

I was looking out for the six-mile marker, and I saw it. I was ready. I knew I only had another 300m. My face suddenly felt really hot and swollen as the enormity of the situation hit me and it was all I could do not to cry. I had to laugh, though, as I realised that between me and the finish line was… a hill.

My legs were going faster than my brain could tell them they were being stupid and I defeated that hill without thinking about it. There was a sharp turn to the right, where the tarmac turned into grass, and then the home straight.

I don’t usually do sprint finishes and I’m glad I stuck to that rule. Remember I said earlier that there was a lot of dew? Well, it hadn’t evaporated since sunrise, so those who did speed up realised that wet grass = no traction and went flying.

The finish line was right there in front of me and so were the two chip sensors. I passed the first one and heard my name over the tannoy. I crossed the finish line 54 minutes and 3 seconds after I started, the 82nd runner out of 450 and the 27th female of 292. I came 9th out of 86 people in my age category.

Not only was I chuffed with my position, I was pretty impressed at how consistent my splits were (timings aren’t 100% accurate as I was relying on GPS only):

Would I run another 10k race? Yes.

Am I tempted to go further? Well, at the running group Christmas drinks some helpful person pointed out to me that to compete in a half marathon, you only need to train to about 15k, and I reckon I can do that, so…