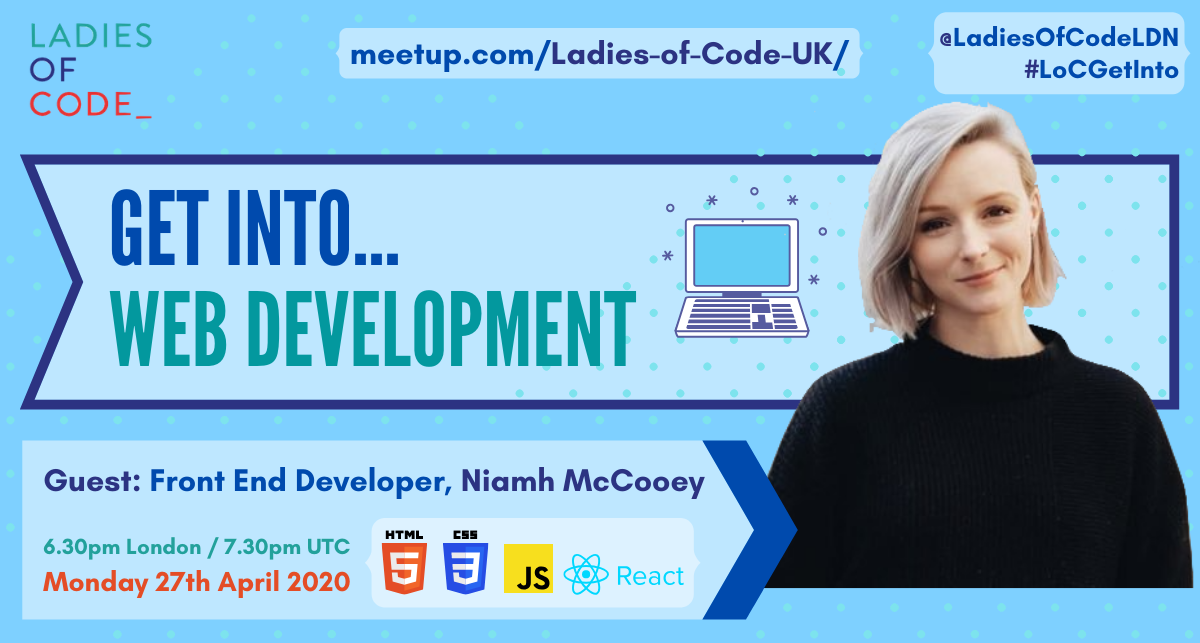 I’ve been looking at ways to innovate our Ladies Of Code (LoC) London offerings now that COVID-19 has forced us 100% online, which led to me devising an interview format for our Get Into… series.

Get Into… is where we demystify roles in the tech industry. Our first event was Get Into… Gaming and AI, which was a traditional talk with slides and was very popular. We’re currently in lockdown and, while we used to plan one in-person meetup per month, we’ve been producing at least two every week since the beginning of April.

I’m not sure whether this is because:

Either way, we’ve been keen to keep up the momentum and support our community with opportunities to get together and learn stuff.

LoC events cater for those who are already in tech and want to level up and/or switch tracks as well as those who are new to the industry. People are always keen to hear from those who have gone before them. So we had a think about some of the roles people are most curious about. I am a web developer, so I took an action to find someone who could talk about how they got into web development.

I knew exactly whom I wanted to interview. I had met Niamh McCooey at an event last year and she was at GDCFP Day too. Later in 2019, as experienced speakers, we gave talks at the same tech meetup.

Niamh’s story is a bit different because she taught herself. I wanted to highlight this as a viable route to paid coding work which may be an option for those who can’t access bootcamps or similar courses.

I know talks take weeks to write. I wanted to reduce the labour on Niamh as well as minimise the lead time. I hit upon the idea of using a chat show-style interview format instead of asking Niamh to write a new talk.

Advantages to the speaker:

I wanted the interview series to have some longevity and be available for those who couldn’t watch it live, so I created LoC’s first YouTube channel.

The name of this series was Get Into… (we also have our project co-working series Get On With It and Get Coffee, our lean coffee series). I created an eyecatching Get Into… brand and promotional banner (the one at the top of this page) to use on meetup.com and across social networks (including YouTube). I designed it so it was easily adaptable for other events in the series while retaining the same look and feel.

On the day, I had a set of questions I had prepared beforehand, along with some which had been suggested by attendees. I decided to weave the latter into the interview, as opposed to ask them in a big unordered chunk at the end of the discussion.

As mentioned earlier, the interview format works perfectly for getting guests onboard and in the hot seat quickly, because they immediately recognise that they have very little work to do beyond giving up a couple of hours of their time to talk to you.

I chose my questions carefully and put a lot of thought into how to structure the interview. I didn’t purely want to go through a chronological description of how Niamh changed careers. Therefore I arranged the questions into three themes:

I also came up with the idea of doing two speed rounds. This was partly because I knew Niamh and knew she would be a good sport, but also to break the interview up. It’s hard for the audience to stay focused when they’ve been staring at a screen all day so I wanted to change up the pace and tone. Here are the clips:

We invited attendees to suggest questions either when signing up for the event, or in the Zoom chat function during the interview. Some of the questions were similar to each other or to questions already on my list, so I didn’t ask all of them verbatim.

We always make sure we have one person whose job it is to be the Zoom host, so they can manage any code of conduct violations etc. Therefore my only role at this event was to interview Niamh. Like I said earlier, this required a lot of focus and flexibility as audience questions were being sent to me which I had to assess quickly while still listening to what Niamh was saying and formulating my next response.

I’m not an expert in video editing but I wanted to make it look less plain than a basic Zoom recording. Therefore I post-produced the video, by:

I created a YouTube channel for LoC and uploaded the video.

I then promoted the video across social media.

Here is the full interview:

If you have a suggestion for a role we could feature on Get Into… or would like to speak at one of our events, please contact me!