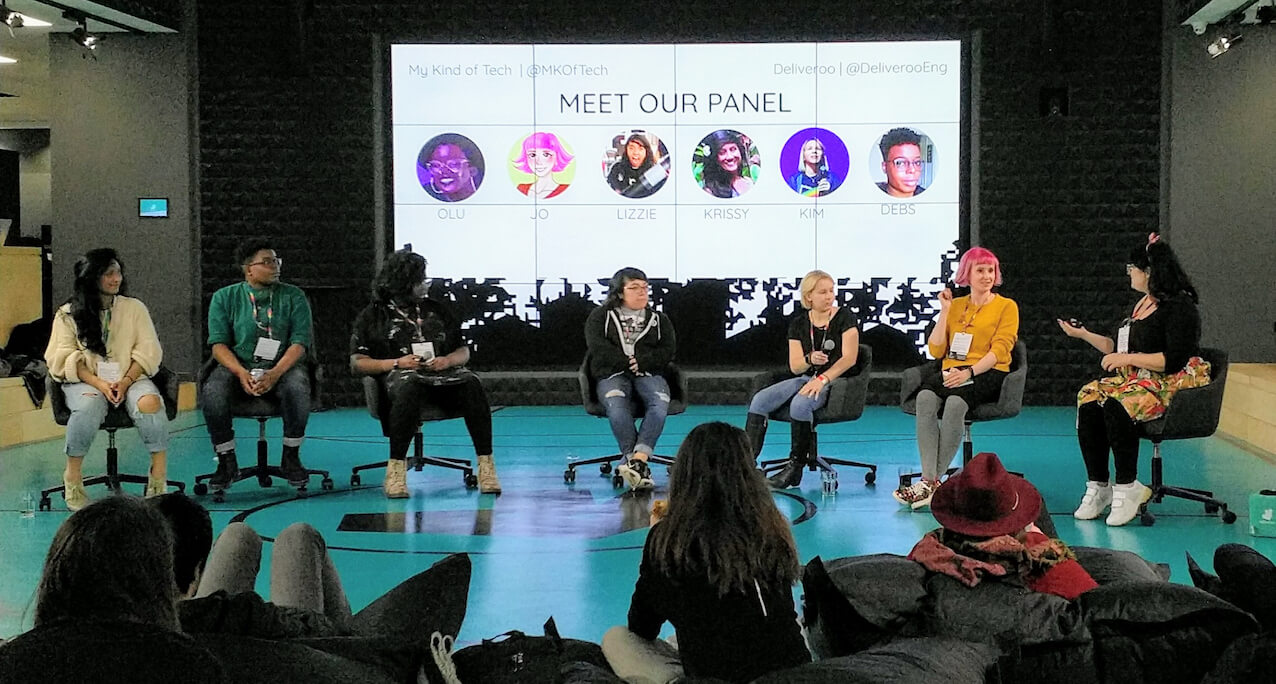 When you enter the tech industry, you soon realise that meetups are a Thing. Groups gather every night of the week in every major city in the world and share IT ideas and knowledge over pizza and beers.

Statistics, by their very nature, vary - but, by any measure, tech is dominated by white men and has been for decades. There are, however, thousands of women, people of colour and other minorities in the industry. And there are countless community groups catering to their needs.

But by being inclusive, are these groups actually exclusive? Have you ever seen a meetup advertised and thought it looked great but then realised that you’re not the target market for the group? How did this make you feel? Happy that the marginalised community in question had a safe space, or slighted and wondering how they’d like it if you had a club just for people like you?

Would you agree that, mostly, people just want to be themselves? Have you ever experienced a time where you felt you couldn’t?

I am currently a Director at Women Who Code London and, before I moved into software engineering, I headed up the staff association for women in senior roles at London’s Metropolitan Police. There’s no training or instruction manual for running these organisations: you get the best results by communicating and collaborating.

So when I saw that Amy Dickens from My Kind Of Tech was chairing a panel discussion on Building Inclusive Communities In Tech, I booked my seat straightaway.

As the discussion developed, a few recurring themes jumped out at me. Some of these will sound familiar, so let’s examine each in turn…

Why can’t all events be open to everyone?

You’ll often find that many events catering to minority groups are actually open to everyone! Next time you see an interesting event you’d like to attend and there are no eligibility criteria listed, reach out to the organisers and ask if you can attend. Nine times out of 10, they will be happy for you to join in.

Debs Durojaiye, organiser at Afrotech Fest, says that those who are not Black African or Black Caribbean are welcome to take part. Her response to “reversism” is that “anyone can attend, it’s just we’re not focused on you. Come along and see what it’s like to be a minority and what our people have to say.”

Some communities provide coaching and practical help with coding to help people from underrepresented groups learn to program. Codebar is one of these: their concept works by pairing experienced developers with beginners, and as with any organisation built on volunteering, resources can be scarce. Therefore, they need to ensure places at their weekly workshops go to the people who need the most support. Jo Franchetti, a mentor and organiser at Codebar London, says that “before the event we make our rules of eligibility clear on the website. If someone signs up for a place and it turns out they’re not eligible then we suggest other events that might be suitable”.

Why is there a need for particular communities?

When I decided to become a software engineer, I browsed Meetup.com for tech events and found a couple that were targeted at women. At the time, those ones just seemed to be the most welcoming to new entrants to the tech industry. The topics were suitable for beginners and the networking segments seemed low-pressure and friendly enough for introverts! Why was that? Because I could see that many of the attendees seemed to be similar to me.

Amy commented that in the tech industry, she sometimes felt like a misfit when all she wanted was to be her true and open self. Jo agreed: “At my first meetup, the lineup was mostly white men, everyone got drunk at the end and I didn’t realise I was faking being happy. When I joined Codebar, I was allowed to say I’m a woman in this space and it’s hard.” Debs “looked around and thought where are the other black people?” Unfortunately, Olu Niyi-Awosusi, organiser of wildcardjs, a group for underrepresented JavaScript developers, had a similar experience: “I went, didn’t meet anyone, got my pizza and went home.”

Lizzie Siegle, organiser at Spectra, a women’s hackathon, went to a women’s college which showed her how much you can build people’s confidence given the right environment: “I saw women everywhere doing computer science, bio, math and thought I can do this too!”

What’s this about a Code of Conduct? We’re all adults, surely people know how to behave?

You only have to type #MeToo into Twitter to find millions of stories from people who were subjected to abuse, but crucially did not feel they could report it at the time. Whether it was because they felt intimidated, or because abusive behaviour was so normalised that they thought what was done to them was acceptable, not everyone has a way of safely dealing with mistreatment. Certain abusers operate on the warped logic that they were never told that what they are doing is wrong or unwanted.

A clear Code of Conduct lets people know exactly what is unacceptable for that community. For that reason, a lot of thought goes not only into creating Codes of Conduct, but also how to handle any violation reports.

At My Kind of Tech and many other communities, each event begins by showing attendees the Code of Conduct (CoC). Debs Durojaiye’s advice for creating a CoC is to “look at the most marginalised group and prioritise their safety. It’s easy to fall into the trap of only thinking about racial differences but you should also be mindful of issues like transmisogyny. Also, you need to make sure you know what it looks like to enforce the CoC. Are you ready to kick someone out or have the conversation?”

Jo Franchetti has experienced CoC contravention where she didn’t feel supported in upholding it: “I’ve been in the situation where I’ve not known what to do next, I felt angered and knew it was wrong.”

Amy adds that “you need to make sure you don’t draw undue attention to the person who reported it. I’m pro-anonymous reporting, we have a phone number and I brief my team before each event so they know how to handle things.”

I am new at running communities. What can I do to help my members, other than organise events?

The more targeted a community is, the more it can cater closely to the needs of its members and help them to feel empowered. There are certain things that many people struggle with, for example networking. Sometimes it feels more comfortable practising this in a safe space with people who face similar issues to you.

Events and other face-to-face communication methods are invaluable, but they are also labour-intensive and schedule-based. Consider using online methods to fill the gaps between meetups. For example, Kim Noel, a Community Builder, said, “we have a platform for people to share things they’re working on - a hacker group. People initially didn’t want to be the first to share. But when they got good feedback, people asking have you thought about doing it this way, it helped them to feel it was OK to continue doing what they’re doing”.

Amy agreed: “If you shine, I shine. Use social media to lift people - if we do things together, we’re not competing with each other.” Amy also likes the use of social media to connect members “as there’s not as much pressure as with Slack.”

Olu Niyi-Awosusi’s community is still quite small, so they encourage members to talk to people on Twitter before the meetups which then makes it easier to introduce yourself at the event. Jo agrees that it’s important for people to feel confident about walking into the meetup. Organisers can easily see if someone is new to Codebar when they check them in, which then kicks off a well-oiled sequence of events. First-time students get the full run-through and immediately matched up with a regular who will do the important stuff like introduce them to people and show them where the food is.

Some communities run socials alongside their regular meetups. These don’t have to be anything formal - Kim organised cheap Tuesday cinema trips which worked well: “it helps that they’ve done the intros beforehand at meetups.”

I want to get involved with an inclusive community. How can I be a good ally?

Good allies are invaluable, especially as many organisers run communities in their own time, for no pay. A couple of the panellists shared that their supporters often take on the emotional labour of responding to and educating critics and challenging reversism. The overarching message was to remember that you are there in an assistive capacity. “Be prepared to step aside when the need arises,” advises Jo. “It is great to have a voice amplifying the message, but make sure the message is coming from other people.”

It’s always best to actually check that the community wants your help before foisting it upon them. Debs says that she likes to be asked what she needs, rather than be told “I wanna do this thing… Your audience would really benefit from…”

Former Board Member at Women Hack for Non-Profits, Kriselda Rabino, reminded us that events aren’t the be-all and end-all: “a lot of people want to help with the events but more work is needed beforehand - outreach. You don’t have to be present at the actual event.”

Finally, Amy recommends paying it back (for example, provide public speaking opportunities to those who want them) so that others can “go through a barrier easier than you did - hold people up, hold open doors.”

So, does inclusion mean exclusion? It can, but most of the time it doesn’t. There are huge benefits to allowing everyone in: people can come and learn about the challenges you face. And equally, some community members will thrive more if they can learn and grow in a safe space which is just for them, especially if they spend 40 hours a week in environments that they don’t feel 100% comfortable in. Mostly, people just want to be themselves.

I left this event feeling more prepared to take my next step in the meetup arena. Following my experience at the Global Diversity CFP Day, I have applied to give my first tech talk at a new talent showcase. This is organised by a community who are trying to improve diversity in tech. Usually, most of their speakers are women or those from other typically under-represented backgrounds in technology. And everyone is welcome to attend.